Since 1944, nonprofit Heifer International has equipped and empowered families and communities around the world to build self-reliance that lifts people out of hunger and poverty. In her eight-year tenure, Manager of Global Partnerships & Alliances Suzanne Munson has witnessed these inclusive, sustainable methods transform numerous lives.

“Our holistic approach to ending hunger and poverty is what makes our work effective,” Munson says. Since dire straits have no single culprit, the solution must address all causes. Values-based holistic community development (VBHCD) is the multi-pronged approach Heifer uses. “It means we work directly with small-scale farmers and their families to identify what they need to thrive,” Munson explains. Project participants — many of them women — receive training and assets: gifts of livestock, seeds and trees, access to clean water and improved sanitation and hygiene. In this way, Heifer ensures those with little opportunity get the tools to lift themselves out of poverty. 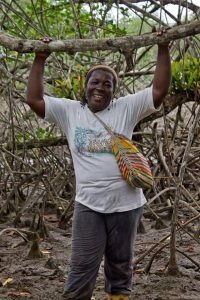 Heifer employs in-country teams who speak the language and understand the culture and issues that contribute to hunger, poverty and marginalization. This accelerates the process of inclusion, which is inherent in Heifer’s holistic approach. These teams work throughout the life of a project to train leaders to continue the work after Heifer is gone. “This is the true sustainability of Heifer’s model,” Munson says. “Communities learns to be self-reliant, independent.” This thread is continued with Passing on the Gift®, a promise each recipient makes to pass on gifts of training and livestock to other members in the community. With a typical “pass on” rate of seven to nine generations, the offspring of each original animal benefits seven to nine more families. “We have seen this incredible model build social capital and foster inclusion in an amazing way,” Munson says.

Countless incredible women have emerged from Heifer’s fold. “I’ve met so many strong, brilliant women during my time at Heifer,” Munson says, including Fanny in the mangroves of Ecuador. Fanny is an activist and fierce advocate for families whose livelihoods on the coast have been threatened by the invasion of large shrimping companies. “They buy up all the land,” Munson explains, “and clear cut the precious mangrove forests, ruining the natural ecosystem by setting up artificial shrimp ponds that leak chemicals and toxins into the communities’ water supply.” These people used to have an abundance of crab, shrimp, mussels and clams. Now they have barely enough to feed their families. Fanny’s work to defend the rights of the community and protect the mangroves is dangerous. She’s been shot at, threatened, and witnessed a number of atrocities,” Munson says. “She’s seen defiant community members killed and entire hamlets of houses burned down as warnings to stop interfering.” Nevertheless, Fanny continues to persist to address food insecurity, and for the mangroves, hoping to one day regain all that’s been lost.

Hear more from Suzanne Munson as she represents Heifer International on a panel at this year’s World Woman Summit, October 11-12 in Little Rock.

Sorry, no events matched your criteria.