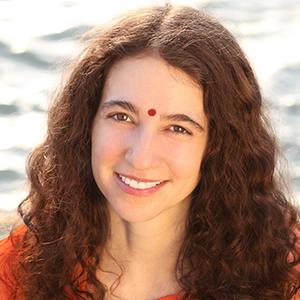 Sadhvi Bhagawati Saraswatiji was raised in an American family in Hollywood, California, and graduated from Stanford University. She was completing her Ph.D. in Psychology when she left America in 1996 to live at Parmarth Niketan Ashram in Rishikesh, India. She has been living there for the past 24 years, engaged in spiritual practice and service.

Sadhviji was officially initiated into the order of Sanyas (monastic renunciation) in the year 2000, by her Guru, His Holiness Swami Chidanand Saraswatiji, one of India’s most revered spiritual leaders and the President of Parmarth Niketan.

At Parmarth Niketan, Rishikesh, where Sadhviji lives most of the year, she gives daily spiritual discourses and satsang, teaches meditation, provides counseling and oversees a myriad of charitable and humanitarian projects.
Sadhviji serves as:

• Secretary-General of the Global Interfaith WASH Alliance, the world’s first alliance of religious leaders for Water, Sanitation and Hygiene, launched by UNICEF in 2013.
• President of Divine Shakti Foundation, a charitable organization which runs free education, vocational training and empowerment to women and children.
• Director of the world-famous International Yoga Festival, which has been held at Parmarth Niketan since 1989 and covered in Time Magazine, CNN, New York Times and other prestigious publications.

Sadhviji is a renowned speaker who gives keynote addresses at large international forums on a wide variety of topics ranging from conscious business to science and spirituality to sustainable development, the keys of happiness and peace in life to all aspects of yoga. Her talks blend the knowledge and logic of the West with the insights, spirituality and wisdom of the East, and she is renowned as a spiritual bridge between the two cultures. Sadhviji’s TEDx talk on her journey from “Hollywood to the Holy Woods” has been watched by over 160,000 people and the documentary on her life has been watched online by nearly a quarter of a million people.

Sadhviji has received numerous national and international awards and recognition for her work with Water, Sanitation and Hygiene as well as women’s upliftment and empowerment including from the Cabinet Minister of Water Resources, Government of India, as well as from the Ambassador of the United States to India.

Sadhviji also serves on:
• United Nations Faith Advisory Council on Religion as Vice Chair.
• The Steering Committee for Partnership for Religion and Sustainable Development (PaRD), an international body comprising governments of twelve countries (including United States, UK, and Germany), the United Nations, the World Bank, the African Union and the world’s most renowned faith-based organizations.
• The Steering Committee for the World Bank-United Nations campaign with international faith-based organizations of the “Moral Imperative to End Extreme Poverty”.

Sadhviji was the Managing Editor for the monumental project of the 11-volume Encyclopedia of Hinduism. In addition, she regularly contributes to Huffington Post, Dainik Jagran, Speaking Tree/Times of India, Thrive Global, The Pioneer, and other renowned publications.